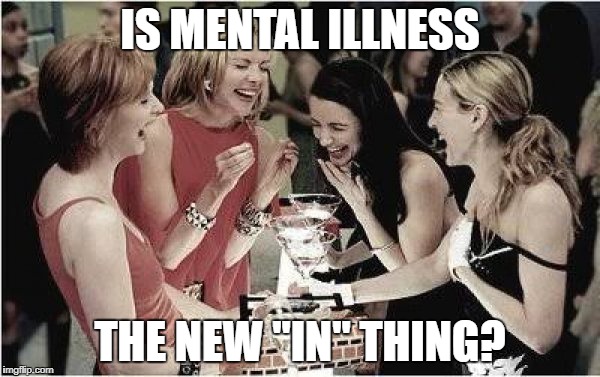 I’m thinking of myself as the “Carrie Bradshaw” of mental illness right now. In fact, right now I’m wearing my pajamas and a sleeping mask on my head as I write this, sipping a black coffee and chain smoking cigarettes with a photo of Mr. Big on my nightstand. Okay, I don’t have the coffee or cigarettes or the photo. 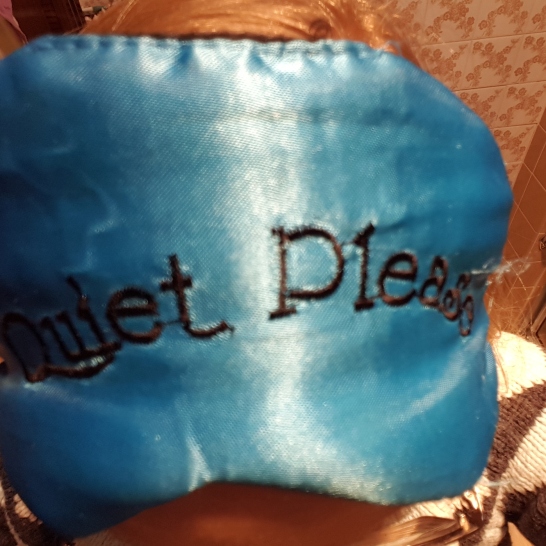 And I’m sitting in a living room, so there isn’t even a nightstand nearby. I am sort of like Carrie in that I write, not a column for a trendy New York city paper, but a blog for dorky, silly people such as myself. Sorry, I called you dorky and silly if you’re reading this. But I’m dorky and silly, so I imagine if you enjoy my writing that you must like dorky, silliness if you’re still reading this. Where was I?

Oh yes. I’m like the “Carrie Bradshaw” of mental illness. If I did write for a trendy, New York paper, my column would be called Crazy and the City. Seeing as how I live in the Maritimes though, I would likely write for The Coast and my column would be Crazy in the Tiny City.  But am I crazy? I thought I was but some things have happened recently that called into question all the things I thought about mental illness previously. Let me tell you all about my BFFs, Miranda, Charlotte and Samantha. We all went to lunch the other day and…

Okay, I am not so much like Carrie. I do actually have a Samantha friend. She may be better known to you as the Blog Broad. But she’s gay, and too crippled up with fibromyalgia, Chronic Fatigue Syndrome and slipped discs in her back most of the time to engage in the sexual acrobatics of Samantha from Sex in the City.

I also have a Miranda-ish friend, T. But she isn’t really very Miranda-like other than she has short red hair most of the time (she likes to change her hair quite often). She isn’t very sarcastic, she is an optimist and she’s very Catholic. And I don’t have a Charlotte friend at all.

So back to that thing that happened that caused me to question my insanity. Those of you who may have started following my blog may have noticed that I have disappeared for a while. In the days leading up to Christmas, things in my life went very… weird? No, not weird. They went crazy, literally. Someone very close to me went into a state of mania. So the last month was spent going back and forth from a very well known mental institution located here in the Maritimes.

I’d never seen anyone in a state of mania before. It was an eye opener- seeing someone whose mind was broken to smithereens, going from one thought to another at the speed of light; seeing someone who was speaking to objects and dead people. Then visiting them at the hospital surrounded by other people in various degrees of true mental health crises. I couldn’t help but question all my previous-held notions about mental illness. I realize that there are varying degrees of mental illness, just like there are different stages of cancer. I suppose someone with mania would be at Stage 4 if they had cancer. Whereas I would likely be in the pre-cancerous cells stage or Stage 1 if I were to compare my “mental illness” to cancer. 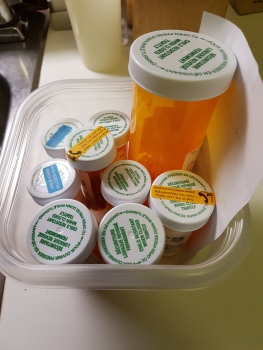 But it got me thinking about all of the people I know who are struggling with mental wellness, including myself, and I couldn’t help but wonder, are there really so many people who are mentally ill? Everyone seems to be on some sort of prescription: Zoloft, Effexor, Celexa, Prozac, Paxil, etc.. Is it possible for so many people to be mentally ill? Is it legitimate mental illness or is our society making us sick? Are we all so obsessed with being happy that we need to take happy pills to find fulfillment? Or is it technology that is creating havoc and anxiety in our minds? Is there really an increase in the incidences of mental illness or is it an increase in awareness of it, a combination of both, OR is mental illness the “In” thing? Could we all just be normal?

I also have been wondering, what is “normal” anyway? I’ve been reading a lot of other blogs about mental illness and I’ve read Jenny Lawson’s books about the same topic, and I find I identify with the writing because as I read, I’m connecting- OMG- This is EXACTLY how I feel. But maybe we’re not really the crazy ones at all. Maybe we’re just the ones who are brave enough to share our true thoughts and feelings and bare our souls to the world. Maybe the so-called (self-called) “normal” people are actually JUST LIKE US but are pretending they don’t ever feel socially awkward, or isolated, or whatever. I think they are pretending! I think everyone has some element of craziness, but some of us are better at hiding it than others. I think crazy IS normal. And that the “normals” are really the crazy ones among us because they are crazy and don’t even recognize it!! Oooooh…. you “normal” people really piss me off, thinking you’re all that and a bag of dill pickle chips, making me think I’m the crazy one and you’re crazier than a pack of wild hyenas running around in a Walmart.

Yes, I have stopped taking my pills. I’m normal, after all.

It snowed today, December 9, 2017, the first December snow fall of the year. Just earlier today, I was reading Jenny Lawson’s post “Strange New Weather Patterns” and lamenting that here on the East Coast of Canada, we had not seen our first real snow fall, the kind that sticks to the ground. It makes me think of “Frosty the Snowman” and the first few lines of the TV special, “I suppose it all started with the snow. You see, it was a very special kind of snow. A snow that made the happy happier, and the giddy even giddier. A snow that’d make a homecoming homier, and natural enemies, friends, natural. For it was the first snow of the season.” Around 4 pm today, we got our first snow of the season. It is now twenty minutes to 9pm and it has not stopped. And even though, here in the Maritimes, snow is a regular occurrence during the winter months, it is still magical nonetheless. And after reading Jenny’s post, I saw the fresh snow with fresh eyes and happy memories of childhood flooded back. Trying to catch snowflakes on my tongue, making snow angels, and snow forts and after hours of playing in the snow, going into my warm, cozy house to a cup of hot chocolate served by my mother.

Inspired, I decided to go for a winter walk around the city of Saint John, New Brunswick where I am staying for the time being. As I walked, I took in the scenery around me, taking in its magic with each breath like meditation. Suddenly it hit me why I love the movie It’s a Wonderful Life so much. When the world is blanketed in white snow, it is like the black and white snowy scenes on the night that George Bailey is visited by Clarence, the angel trying to get his wings.

Walking in the snow in December with Christmas approaching fast means the added beauty of the Christmas lights shining in the snow. One of the first houses I passed were the Griswolds 2.0.

Not only is their house completely covered with lights from top to bottom, they also have a speaker blaring Christmas carols as you walk by. And in the snow, what would usually be pretty tacky, suddenly becomes moment of wondrous beauty. With carols singing in my head, I continued toward the Harbour Walk Trail along the waterfront of Saint John. If you haven’t been to Saint John in a while, or ever at all, the Harbour Walk Trail is an amazing set of paths that run from the Reversing Falls to Uptown Saint John. That’s right, Saint John has an “Uptown” not a downtown. I have no explanation for you.

As I walked down in the direction of Uptown, I saw a display of Christmas lights arranged into the form of a giant tree. With no snow, it’s nice. But suddenly, with the flakes of snow surrounding it, it was the most fabulous thing my eyes had ever had the privilege of seeing. I kept walking, down into the bowels of the park toward the Reversing Falls. Instead of raining trees, like Jenny Lawson saw, I saw a raining overpass with a small pond forming below.

Snowplows going by on the overpass pushing snow over its edges were not any help to the situation. I looped up around into the North End of the city and I finally came upon an intersection with a church. I don’t even know what denomination the church is, but it doesn’t matter. I’m not sure why, but I think old churches are among the most beautiful structures created by humankind. And this church, amid the falling snow, did not disappoint. Even though a McDonald’s is right across the corner, our fast food addiction could still not dim the joy brought from the view of the church.

By the time I started back toward “home,” I was soaked from head to toe with sticky snow. (This snow is perfect Frosty the Snowman snow, and if enough falls tonight and stays around tomorrow, I may just make a snowman too.) It’s funny how at the beginning of my short journey in the snow, it was full of excitement and wonder and how quickly that changes when the cold and wet sets in. Instead of breathing in each moment, feeling the joy of being alive, I couldn’t wait to get the hell home to enjoy a cup of tea and my warm PJs. As my mood shifted, I walked past a group of people hanging out at the Curling Rink and heard a lady say what most Maritimers say about the first snow, “It’s pretty, but that’s about it.”

I am now all cozy in my bed with my laptop and my hubby, listening to the sound of sirens on their way to the nearby hospital, non-stop. It seems the magic of the snow mesmerizes us every year and we forget how to drive in the snow. Tonight I will be lulled asleep by memories of my mystic walk in the snow and the blaring sirens taking stupid unprepared drivers to the hospital.

I hope nobody died.